This recipe, originally from the How Sweet It Is blog, caught my attention because they idea of potato and parmesan cheese combined together into a crispy bite sized treat was just too good to ignore. It was the perfect thing to make on a rainy sunday afternoon, and combined with the Feta & Pesto Stuffed Peppadew Peppers , the Dolmades, a glass of wine, and some bread, these little puffs make a great lunch or dinner to graze your way through while chatting with a friend or two.

The recipe makes about 70 puffs, but it is easy to halve. Honestly though, I do not think 70 of these puffs would be all that hard to get through.

Add potatoes to a large pot of boiling water and cook until fork tender, about 20 minutes. Drain the potatoes and then mash them with salt, pepper, butter and milk. Then stir in parmesan and onions, then place the mixture in the fridge to cool for 15-20 minutes.

Preheat the oven to 200 C or 400 F. I would recommend using the fan bake setting, if you have one on your oven.

Remove potatoe mixture from the fridge and roll into golf ball sized balls. Dip each potato ball into the beaten egg, then cover in bread crumbs. Place them on a baking sheet about 20mm or 1-2 inches apart, and hit each with a quick spritz of olive oil or cooking spray.

Bake for 12-15 minutes, or until outside is crispy.

Serve them while still warm with a lemon garlic aioli, pesto or other dipping sauce. 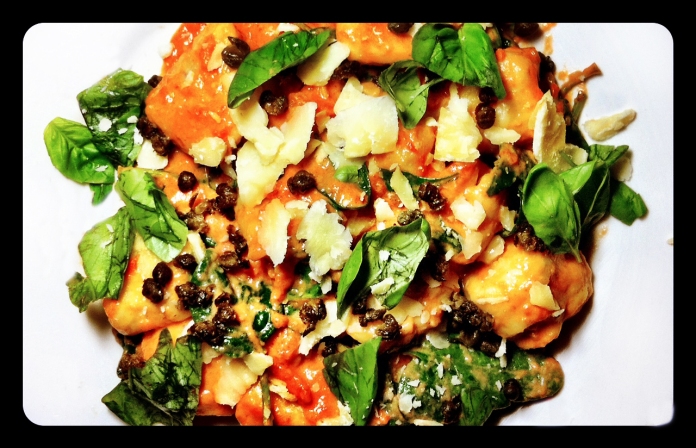 Gnocchi are one of those foods that are amazing to eat when made right, and for whatever reason are so often done wrong.  It is so disappointing to order gnocchi at a restaurant expecting little fluffy, melt in your mouth, pillows of potato goodness, and what is delivered on your plate are gluggy, sticky potato rocks.

Because it seemed too hard and daunting a task to make gnocchi that are nice to eat, I had never tried making my own . . . until now. My friend Stef claims she has a fool-proof easy recipe for potato gnocchi given to her by an Italian friend, Elisa Testoni, who used to run Italian cooking classes in Christchurch and now has moved back to Italy to open her own bed & breakfast (I know where I am staying next time I am in Italy).

So . . . I enlisted Stef’s help to make gnocchi for Day 33 of my 100 Days Project. Gnocchi are thick, soft Italian dumplings; the origin of which dates back to ancient Roman times. Originally made from semolina flour, modern gnocchi are most often made from potato, but ingredients vary depending on the region a particular recipe is from.  Traditionally gnocchi are eaten as a first course commonly served with melted or browned butter with sage, pesto, and other various sauces.

Mascarpone is a thick spreadable Italian cheese made from cream. It is considered a specialty of the Lombardy region of Italy and is used to thicken sauces and risottos, and is also used in deserts like Tiramisu. For this recipe the macarpone is added to tomato sauce to give it a creamy texture and flavor. On its own, I thought the combination of tomato and mascarpone would be delicious, but I like to have a little texture and saltiness with creamy sauces. A friend had recently been talking about frying capers, and how they “pop in your mouth with a crunch releasing that yummy warm salty brine”. From this description, I thought fried capers would make the perfect finishing touch for my plate of gnocchi and sauce.

Instead of being a single recipe, this dish for Day 33 is more of a combination of food elements that I have been wanting to try. The gnocchi, the sauce, and the fried capers originally come from three different recipes or ideas I have heard about. Together, the three different elements create a quite tasty meal.

for the sauce – recipe adapted from BBC Good Food.

For the gnocchi: Boil potatoes with skins on.  When cool enough to handle remove potato skins with your thumbs.  Mash the potato and let completely cool. This is best prepared ahead of time so that the mashed potato can completely cool, but can be put in the refrigerator or freezer to save time.

Add the lightly beaten egg, flour, and parmesan. Do not add these ingredients until the potato has completely cooled or else your gnocchi will come out sticky and gluggy instead of light and fluffy.

On a lightly floured surface, knead the ingredients into a smooth dough, and then pad it out into a shape about 20mm or 1 inch thick.

Cut the dough into strips about 20mm or 1 inch wide. Roll the strip back and forth until rounded, and then cut into 30mm or 1 1/2 pieces. With the back of a floured fork give the gnocchi pieces grooves.

While gnocchi are resting, fill a large pot with water and salt, and bring the water to a boil. Once the water is boiling, put the gnocchi pieces into the pot making sure to stir the water so that they do not stick together. If you are using gnocchi that have been frozen from before, then they can come directly out of the freezer and into the pot of boiling water. Bring the water back up to a gentle boil, and when the gnocchi float to the surface they are done.  Use a slotted spoon to transfer the cooked gnocchi from the pot into a colander or plate.

For the sauce: Heat the olive oil in a frying pan, fry the garlic until golden, then add the tomatoes. Season, with salt and pepper or other Italian herbs, and then let simmer for 10 minutes.

Stir in the mascarpone and cook for 2 minutes more.  Add the spinach for the final min of cooking. You want to make sure the spinach is just wilted and not over cooked into the sauce.

For the capers: Drain the capers of any brine and pat dry with a paper towel.

Heat the oil in a small heavy duty skillet over a medium heat. Add capers to oil in the skillet and fry until capers are crisp and open like flowers. Stirring often, they will need to cook for only 45 to 60 seconds.

Using slotted spoon, transfer capers to paper towels to drain. The capers can be fried two hours ahead before being used in a recipe. Just let them stand at room temperature until you’re ready to add them.

To serve: Add cooked gnocchi into the pan of sauce and mix well. Serve immediately with basil leaves, parmesan shavings, and fried capers scattered over the top of each portion.