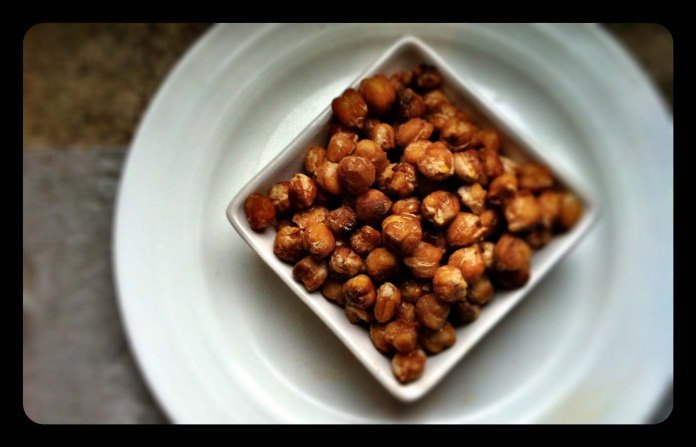 Have you ever bought those over priced crunchy flavored chickpea snacks from the natural foods store?

I know I have, because they usually just taste too good and are a quick healthy high protein snack to have around. Realistically though, I figured they should not be too hard to make and decided to see what Google had to say about the idea. I ended up downloading about half a dozen recipes from various sources, which when it came down to it were all pretty much the same except for the choice of spice mixture to use for flavoring the chickpeas. Some versions were sweet, some salty, some curried, and some with herbs, but I tend to like when savory and sweet are used together, which is why this recipe by Jerry James Stone for a Maple Seat Salt variation caught my attention. Another recipe used smoked paprika in the seasoning, and that got my brain thinking that maple, sea salt, and smoked paprika would make a really yummy flavor combination, and it did!!

Overall, they did not turn out quite as I had imagined. The seasoning was great, but the chickpeas themselves mostly either burned, or were too soft in the middle. There were very few on the tray that actually came out as crunchy as the ones you can buy from the store. Even not as crunchy as expected, they still made a great late morning snack, and would go quiet nicely with an after work beer (or 2). I will definitely have to try again experimenting with different flavor combinations, cooking times, and temperatures.

I wonder if roasting the chickpeas and then dehydrating them might be an easier way to go. Does anyone have a food dehydrator I can borrow?

Preheat the oven to 180 degrees C.

Strain the chickpeas and rinse them clean.

Place a paper towel on a flat surface and spread the chickpeas on to it so that they are a single layer. Place another towel on top of them, rolling them around, until they are completely dry.

Add the seasonings to the chickpeas, and then place them on a baking sheet lined with parchment paper.

Roast them for about 40 minutes until they are a deep golden brown and very crunchy, making sure to not burn them.