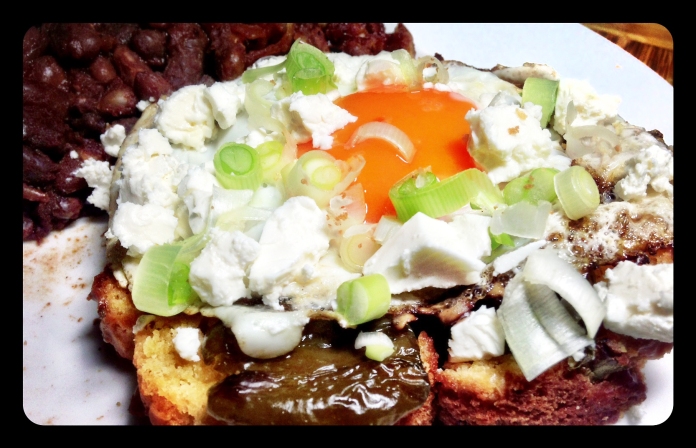 Well . . . when you make fresh bread the day before, than a sandwich of some sort is almost a necessity.

I am a big fan of breakfast sandwiches, piling up layers of tasty ingredients on top of a slice of bread and topping it with some an egg or two. I found this recipe for an open face fried egg sandwich with Roasted Chilies and thought it would be a perfect match for the bread I made for my Day 51: Chipotle and Scallion Buttermilk Bread post.

Fried egg sandwiches have been around since at least the early 1900s, and believed to originally come from England. In 1910, a New York Times article describes the oddity of seeing actors on horror film set eating fried egg sandwiches dressed as “deathlike phantoms”. As an alternative to meat because of the war rationing, the first fast food fried egg sandwiches were introduced, by a manager at a St. Louis White Castle, during WWII .  While many WWII soldiers returned home with the taste for this kind of meal, since fried egg sandwiches called “Banjos” were popular with the troops in the trenches. Here is a piece of “saucy” trivia for you Herbivores . . . food writer Gael Greene wrote about her brief romantic encounter with Elvis Presley, and that a fried egg sandwich was his favorite post-coital snack.

I served this sandwich with the last of the Slow Cooked BBQ Baked Beans from my Day 44 post, which made a perfect Sunday late morning breakfast.

from: Fork, Spoon, and Knife

Melt butter in a pan, and fry the bread in the butter.

Transfer the toast to a plate, and spread it with a thin layer of adobo sauce.

Slice the poblano peppers, and put them on a roasting pan under the grill until they get a bit black. Layer the roasted chillies over the adobo sauce.

Put more butter in the pan and wait for it to melt, before cracking the egg into it. Fry the egg until the clear has gone white and the yolk is not too over cooked. Layer the egg on top of the adobo sauce and the roasted chillies.